If you use your phone illegally while driving, you’re just as dangerous as a drink driver.

It is illegal to hold your phone in your hand to text, talk, receive a call or perform any other function while driving or riding, even when you’re stopped at traffic lights. This includes holding the phone up to, or near your ear. 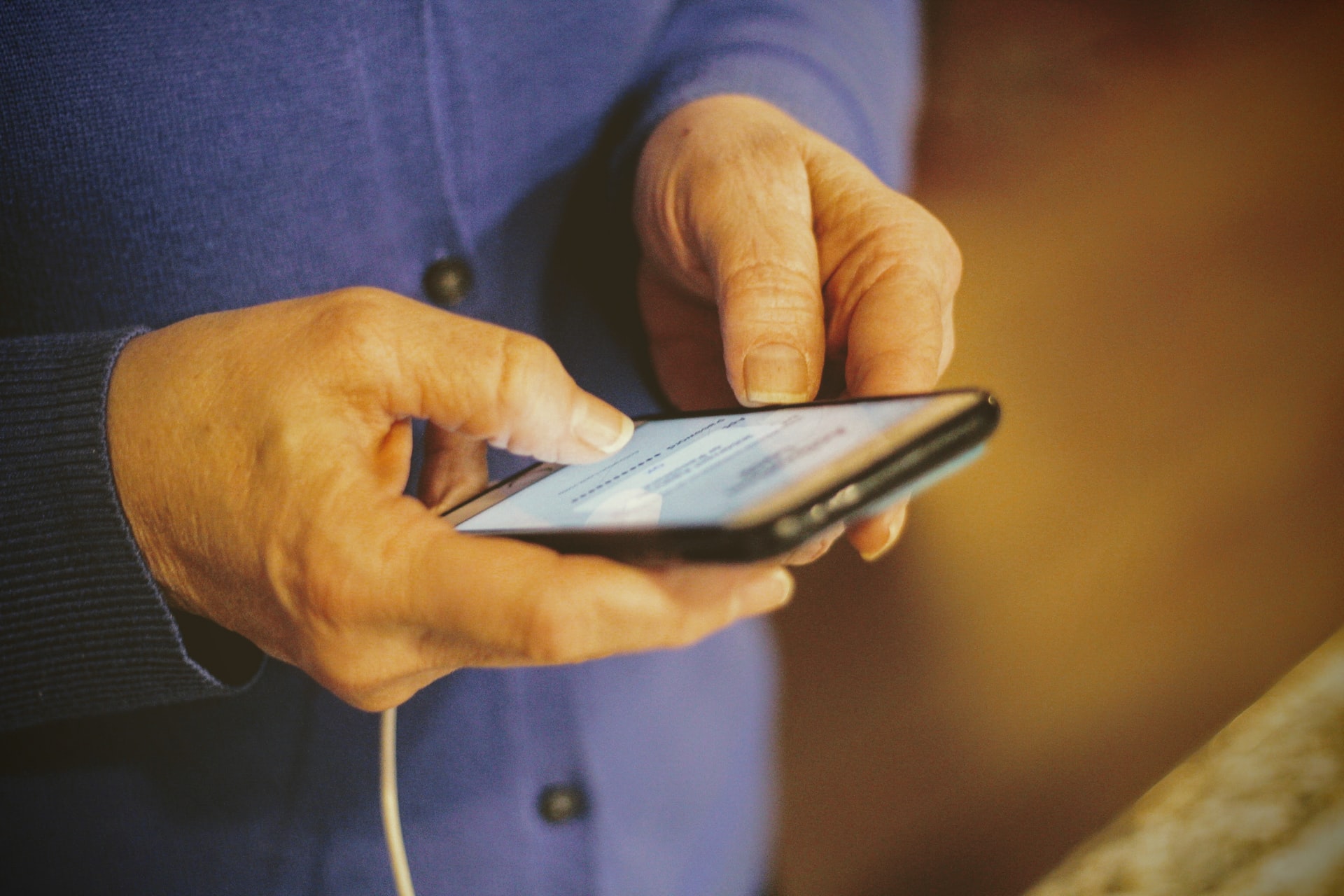 [A camera is fixed on the dashboard of a car recording a male driving. The driver receives a notification on his phone and reaches for it. His face is cropped out of the frame.].

[The notification can be seen blocking his face as he reads the message without hands on the wheel.]

[Another male tradie is texting on his phone without his hands on the wheel while driving. We see the text message show up in front of him.]

[Another female checks her Instagram feed while driving. Followed then by a male checking his phone after getting tagged in a photo.]

Announcer: “Research now shows, if you use a mobile phone while driving…”

[More dash cam footage shows another female texting while driving her car, without any hands.]

[Another man is replying to social video while driving in the car.]

Announcer: “…you are just as dangerous as a drink driver.”

[A man is driving his car while trying to text ‘I’m just as dangerous as a drink driver’ before swerving out of the way of a near-miss.]

[The camera falls out of position and tumbles to the car floor.]

Announcer: “Leave your phone alone. To learn how to set up ‘Do not Disturb While Driving’, search StreetSmarts Queensland.”

If you’re having difficulty adding this feature to your current phone, head to Apple’s support page for further instructions.

Announcer: It’s time to set up ‘Do not disturb while driving’.

Announcer: It’ll take away the temptation – preventing any messages coming through via text or social media. It’s simple to do, do it with me right now.

Announcer: And don’t worry – you will still receive calls through your Bluetooth. Anyone who happens to message you will automatically be sent a reply, telling them you’re currently driving. If it’s an emergency, people can text ‘Urgent’ at the start of their message; then you can pull over safely and check the text.

[Phone disappears into a handbag and is zipped closed.]

Announcer: So when you drive, just leave your phone alone.

How to set up ‘Do Not Disturb While Driving’ on Android

Announcer: It’s time to set up ‘Do not disturb while driving’.

Announcer: It’ll take away the temptation – preventing any messages coming through via text or social media. It’s simple to do, do it with me right now.

Announcer: If you’re using the latest Android, ‘Do not disturb’ is found in your notification shade.

Announcer: Depending on your OS version, the quick toggle may be on the first, or second panel.

Announcer: And don’t worry – If there’s an urgent call, a second attempt to contact you within 15 minutes will come through as normal. So you can pull over, and safely answer it.

[Phone disappears into a handbag and is zipped closed.]

[Announcer: So when you drive, just leave your phone alone.]

Let’s be clear, there’s no safe way to use your mobile phone behind the wheel.
Here are a few myths we’re taking the time to bust for your own safety. 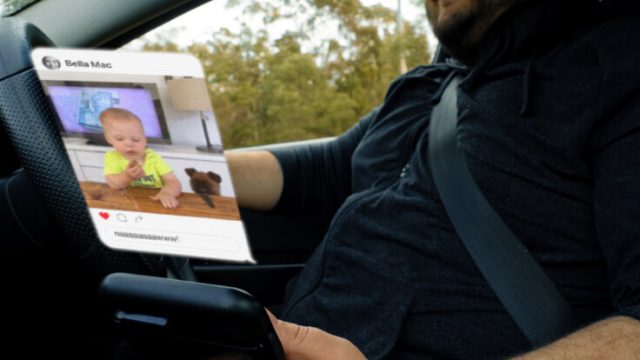 Even the most advanced mathematician cannot calculate a safe distance, quite simply because it’s impossible to know how the other driver will react. They may need to brake in a hurry. Anything can happen. And if you’re looking at your phone, your reaction time will change too. Research shows a driver’s reaction time is comparable to a drink driver with a blood alcohol reading between 0.07 and 0.107.

Checking my mobile phone while stopped at traffic lights is safe and legal.

It’s illegal to use your phone at any time when you’re driving, unless you are safely and legally parked. Drivers are slower to react when using a mobile phone and will often take longer to respond to traffic signals or miss them completely. You could also be tempted to use your phone when you slow down to a stop in traffic or as you take off again – that’s even more dangerous. 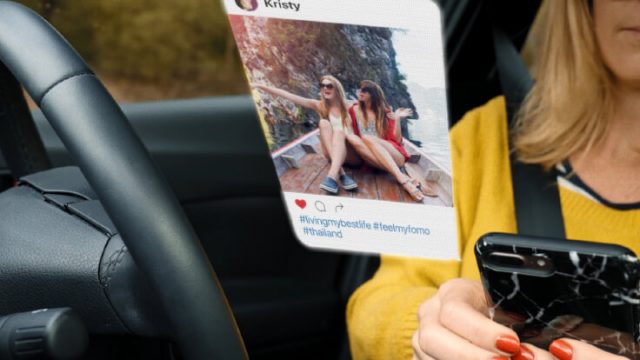 If I drive slower, it’s safe to text.

The unexpected can happen at any time – and even the smallest distraction can be deadly. Even if your eyes are off the road for just 2 seconds, a vehicle travelling 60km travels 33 metres. And if you think slowing down to 40 makes it safer, you’re still driving blind for 22 metres. The average person’s time to react to something is 1.8 seconds. This means nearly 4 seconds can pass before the average driver can react to a hazard, increasing your risk of a serious crash.

How dangerous is it?

Distraction is more dangerous than you think.
Find out how much you put yourself and others at risk when you look at your phone while driving.

Are you as dangerous as a drunk driver?

Are you as dangerous as a drunk driver?

If you’re using your phone when driving, you’re not as focused on the road as you need to be.

Your attention is divided. Your reactions are slower. You’re as dangerous as a drunk driver.

Get the support and advice you need to break the habit.

Search Join the Drive to Save Lives. Authorised by the Queensland Government Brisbane.

Are you driving blind?

Are you driving blind?

At 60 kilometers per hour if you look at your phone when driving even for just 2 seconds you travel up to 33m blind.

Get the support and advice you need to break the habit.

Search Join the Drive to Save Lives. Authorised by the Queensland Government Brisbane.

Are you driving blind – behind the scenes

Are you driving blind – behind the scenes

So many of us are guilty of using our phones when driving. I think we know we shouldn’t, but we don’t know just how dangerous it can be. That was the first part of this campaign, was just trying to bring that to people’s attention. When using your phone you are actually, when you’re distracted you’re as dangerous as a drink driver. There is a real stigma around drink drivers, and I think we wanted to elevate the conversation around distracted driving to that level.

We came up with this great little simple device that the driver was just flipping the phone and as they flipped the phone it became a bottle of whisky. On a personal level, I have a friend of mine, her sister was killed in a car accident by someone using their mobile phone. So it meant a lot to me, this commercial, in terms of how to create a dramatic commercial that punches through to audiences to get them to stop using their mobile phone.

Join the Drive is really a program that is all about encouraging the community to participate and when it comes to distractions, the issue is very much about providing people with the how to’s. People know that using mobile phones is dangerous, they know it causes all sorts of havoc on the roads but they don’t necessarily have the tools, the tips or the advice to kick the habit.

That’s what is so great about this campaign, not only does it demonstrate the dangers but it also gives people a practical solution. An action plan with tips, information, goals and rewards. Everything they need to break this deadly habit.