Drive smarter, not faster Let's change the way we look at speed Factsheet

You're no dummy Road to zero Chin up Settle down stallion

Read on for road safety topics and messages to help all drivers share Queensland roads safely.

Many of us see the road toll as just a number. But behind that large number are hundreds of individual stories. The loss of a loved one, the death of friends or the heartbreak of a family torn apart. My Road Toll is a special project that captures the stories of real Queenslanders and helps us all to see just how one crash can inflict a terrible toll on the people we love. 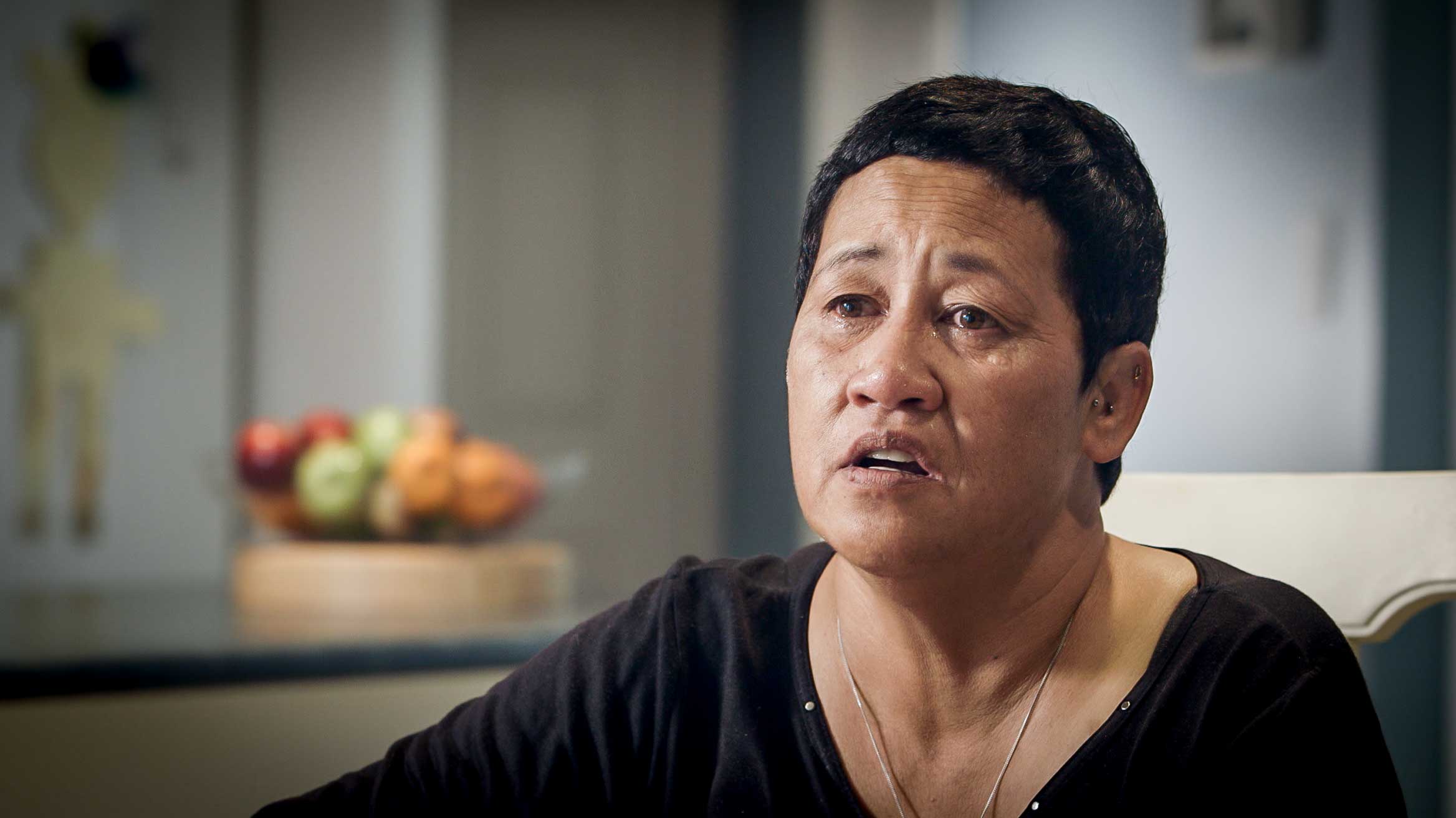 Even one is one too many

Share these videos to connect faces of real people to the road toll.

I just feel like somebody ripped my heart out and forgot to put it back again – Denise, Everton Park

Watch “The loss of a brother”

I just wish we could turn back the clock… and just rip him out of there… and say “what are you doing?” – Joel, Riverhills

Not getting the chance to say goodbye to someone is a terrible thing – Miles, Gold Coast

Wake up to yourself, you’re not bulletproof and things can happen… Anything can happen on the roads – Aunty Neola, Gladstone

They’ll have to live with the fact that they killed my daughter – Catherine, Rockhampton

This person made a mistake and it’s cost our family to no end. It’s ripped us apart and it’s a terrible thing – Brett, Cairns

Watch “The death of an only child”

I’ll never ever get over that I was asleep in my bed, sound asleep and that was happening to him – Anne, Narangba

I didn’t get my last good bye and I wish nothing more than I did – Kiarah, Southport

The loss of a brother

The death of an only child

Woman: My road toll is one

Man: One, my brother Ryan

Man: My road toll is one

Woman: My road toll is two

Woman: My road toll is one

Losing Adam was just…
…there’s no feeling like losing a child.
I feel like somebody ripped my heart out…
…and forgot to put it back again.
It was his wife’s birthday
and he just wanted to have a nice time
…with her and the children…
…and he never made it.
It’s the worst thing…
when you get that knock on the door
…and you see two policemen there
…and you know it’s not good news.
It’s so quick that a life can go.
You just don’t expect it.
I was probably one of those people
who just thought in numbers,
but I think until it impacts on you,
you don’t realise that each of those numbers
there’s a family behind it,
there’s friends, there’s work colleagues.
It just impacts on everybody.
It’s not just a number.
I would like to say to anybody who goes out,
however old you are there’s always somebody
that loves you, so please take care.
Come home.
Knowing how devastating it is
to lose a loved one,
your life changes forever.

The loss of a brother

So, Ryan is my youngest brother
so bit of a larrikin,
liked a laugh you know,
liked to have a drink and have a joke.
He was the baby, so he was very spoilt
but that’s okay.
Much loved obviously
and very much missed.
He was hanging out with a bunch of mates
and they had a motorbike there
and he just took a corner too fast
and hit a light pole and that’s it.
He died on the way to hospital.
So pretty tragic.
Pretty silly way to go really.
I just wish we could turn back to clock,
just rip him out of there you know,
just rip him out of there
and say what are you doing?
Why are you doing this?
I mean there’s just so many things
that he’s now missed out on
like he’s missed out on having his own family
and having his own kids.
In our family the road toll means
a big massive hole that’s been left in our family
‘cause Ryan’s gone and he can’t come back.
He’s missed every day, it’s hard.

Watch “The loss of a brother” on YouTube.
Close modal

Luke Harrop was a larger than life character.
Massive smile on his face,
life of the party, always a lot of fun.
Yeah, Luke was a great sportsman.
He was getting ready
for the Commonwealth Games trials
and was training and racing very well
and he had a bright career in triathlon
but unfortunately that was cut too short.
We were all riding in a group,
about 40 people and all we saw
was this lady come around the corner
sort of across the road in a car,
hit the two guys,
Luke went flying up in the air
and over a barrier
on the other side of the road
and when I got to him
he was caught up in a tree,
he was upside down.
I didn’t know at the time
that he was going to die
but I certainly…it didn’t look good.
After the ambulance came
and took him away I had to
then go and call his father.
It was 6:30 in the morning and I said
Luke’s had an accident,
you need to get down here,
you need to get down here now.
I don’t think he’s going to be okay.
And it was a really, really tough time
and it’s something that
I’ll never forget as long as I live.
Not getting the opportunity to say goodbye
to someone is a terrible thing
and to live with the pieces left behind
and the family and the devastation
it’s quite a hard thing to do.
I think it’s very important for car drivers
to be acknowledging people on the road.
I mean here was a kid
just trying to stay fit and healthy,
riding on the road,
on the side not in the middle of the road,
not doing anything silly
and unfortunately one crash
and his life was taken away.
I don’t think you ever pick up the pieces
after something like that,
you just learn to live with it.

Jumbo was a happy-go-lucky character.
Carefree and he loved his family.
Jumbo was a very funny fellow…
…doing silly things and talking silly.
He was one of our best dancers,
you know, corroboree dancers.
That area where the crash happened
it was on a bend
and as they came around the bend
the car hit the shoulder of the road
and it threw the car
into the path of a big semi-trailer.
Jumbo was 32.
Anyway my other son
had to go down to Mackay
and identify the body.
I wanted to go as well,
but they wouldn’t let me.
It’s affected the whole community,
he was friends with everybody.
The thing that I think about
is him being a father to his son.
His son’s missing out now
and all he’s got is me really.
I’m the one who looks after him,
I’m the one who cares for that boy.
When I hear the road toll
I think about the lives that have been lost
and the families who suffer like I did.
Knowing what I know now
and the pain I’ve gone through
I just hope people when they’re driving
realise that anything can happen,
anything can happen on the roads.

It’s just been really hard as a mum,
it’s been really hard.
The death of a child,
it’s a pain you just can’t describe.
It’s a pain you can’t describe.
Nobody wants anybody
to have to live through it.
The police knocked on our door
and told us that Leslie
had been in an accident
and that my granddaughter was with her.
The police couldn’t tell us straight away
whether Les had passed away or not.
But, then they rang through and found
that she had died on the scene.
She was beautiful, she was just beautiful.
I’ve never wanted to meet the other driver.
They said we could have pressed charges
or we could have done something like that
but then I thought to myself
they’re going to have to live with that.
They’ll have to live with the fact
that they killed my daughter.

Tanya was gorgeous,
funny, clever, bossy…
…but she was our girl and we loved her.
I was a lucky brother, that’s for sure.
She was an amazing person.
Tanya was supposed to meet us
at a training session on Saturday morning
and she didn’t arrive.
I thought she had just been a bit lazy.
I texted her a few times
and she hadn’t answered
which wasn’t like her.
So I got in the car to drive in to see her.
I texted her as well,
I just said answer your phone won’t you,
Mum’s trying to get hold of you,
she’s worried.
And as I was driving back,
I saw her bike
and her, a shoe.
I just knew that it was her.
It was like our hearts were broken.
You don’t recover from something like this.
That’s for sure.
Not long after this happened,
Christmas was coming around
the first Christmas without Tanya
and what do you do for your parents
when they’ve lost their daughter?
So something I came up with
was just some photos that I put together
and I thought might brighten the day
and I thought might be a little memorial
for her at our house.
This family lost a girl
because somebody did the wrong thing.
We know the person made a mistake
and it’s cost our family to no end.
It’s ripped us apart and it’s a terrible thing.

The death of an only child

You shouldn’t have to bury your children.
It’s not natural.
It should be the other way around.
My husband and I struggle every day.
There’s always that sadness deep inside.
Everything’s gone now
so no grandchildren.
Paul was adventurous,
he was very loving, kind.
Loved his family and his friends.
He said I love you Mumma.
That was his last words
and I said I love you too, Baby.
See you later on tonight.
And, I’ll never, ever, get over that I was
asleep in my bed, sound asleep
while that was happening to him.
I had no idea.
I’ll never ever get over that.

Watch “The death of an only child” on YouTube.
Close modal

Lani was great.
We really, really got along
as little brothers and sisters do.
She lived a lot of experiences
for an 18 year old,
she had done it all.
She came into my life
when I met Alex.
She welcomed me
into the family with open arms
as she did everybody.
We were best friends.
She would come and tell me anything
and we all had the best bond together.
The police knocked on the door
at 3 o’clock in the morning
and told us the bad news.
Little sister Lani, she was gone,
she was not with us anymore.
I loved her more than anything.
I’d give anything to have her back.
Just that one last hug to say goodbye
would have been life-changing.
I didn’t get my last goodbye
and I wish nothing more that I did.
Just give me one minute, I promise.
I won’t waste that one minute.
Who’s going to stand next to me
on my wedding day now
and who’s going to stand next to her?
When you get behind the wheel
it’s a lethal weapon
and it has the capability of ripping apart
everything your family has,
everything your friends have
and cause total destruction.